Can water make you lose weight and if so how much should you drink each day? This is a question asked by dieters looking for quick ways to lose weight so lets find out whether the evidence is cut and dried or just plain wet! 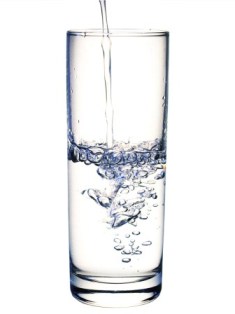 Almost every weight loss tips article recommends drinking water while dieting and suggests water make you lose weight. Whilst there are definite health benefits to be had, they dont ever say why you should drink more water if you want to lose fat fast.

So what does science have to say about the question “Can water make you lose weight?”

Some people claim that drinking water to make you lose weight is a good strategy because water is calorie free and that your body uses energy (calories) to digest it. They go even further suggesting that drinking ice cold water is even better as the body uses calories to heat the water to body temperature. Double whammy!

And whilst both of these facts are true, the amount of calories used is so small its not really worth focussing on as a weight loss aid.

So why is there still so much anecdotal evidence that drinking water can make you lose weight, there are not many scientific studies directly trying to answer this question historically.However, more recently there have been studies which focus on the role of water and weight loss which give us an insight into the effectiveness of H20 as a diet aid.

Heres what they tell us

A recent clinical trial demonstrated that drinking less than a pint of water (500ml/16 oz) before eating a meal proved drinking water to make you lose weight does work.

The study had 48 adults aged 55-75 years old split into two groups, the first group drank the water before meals and the second group didnt.

Both groups followed a low calorie diet which would cause weight loss so the only variable between them was the water consumption prior to meals.

Brenda Davy PHD, a senior author of the study reported to the 240th National Meeting of the American Chemical Society some interesting findings:

The 75  90 calories per meal seems like a negligible amount but over the long 12 week period it clearly had an impact:

Its generally accepted that to lose a pound of fat you need to burn 3500 calories, if we keep that in mind and divide the number of calories reduced over 12 weeks by 3500 it gives us a rough idea of how much fat they should have lost.

Remember the group from the study drinking water lost 5.5 pounds more than the other group, this was clearly due to the reduction in calories associated with eating less.

So the answer to Can water make you lose weight? is yes it can, but we need to appreciate the role it plays rather than just believing that water contains some mystery magical properties that burn fat! Science types are a clever bunch but sometimes even they state the obvious, this was proven when they said “People should drink more water and less sugary, high-calorie drinks. It’s a simple way to facilitate weight management.

At first glance this appears to be plainly obvious but in fact, they are referring to the effect on your appetite when consuming high calorie sugary drinks rather than the difference in calories between water and sugary drinks.

Studies have shown that drinking sugar-sweetened beverages before a single meal means you eat around 7% more than you would if you drank water.

So not only do you get extra poor quality calories from your sugary drink, you also eat 7% more food too.

Can Sugar Free Drinks Instead of Water Make You Lose Weight?

Dieters acknowledge the fact that liquid calories and sugar are a bad idea while dieting so by cutting out these drinks you reduce calories, a good move.

However, as many dieters find water plain and boring, sugar free drinks like Diet Coke and Sprite Zero are appealing. So can sugar free drinks instead of water make you lose weight and what effect do they have on your appetite?

Whilst sugar free drinks often have questionable (from a health perspective) ingredients such as aspartame and artificial sweeteners they are always going to be better their sugary equivalents when it comes to weight loss.

The problem is that people drinking diet sodas tend to eat more calories at meals. This is probably due to them subconsciously believing they can afford to eat more as they saved calories by drinking their diet drink. Some people also believe that diet sodas trick the body into believing calories are on the way and when they dont arrive it craves them thus making you eat more to compensate.

Whatever the reason, as long as you are tracking your calories each day you will know how much you are eating and therefore youll be able to control your food intake a lot better.

For this reason I have no issue with diet sodas and drink them regularly without problems.

How Much Water To Make You Lose Weight?

Different people have different needs so theres no one size fits all guideline but generally most people dont drink enough water.

So just how much water should you drink each day? Well, the guidelines are different for different people so theres no drink 3 litres per day rule across the board for everyone.A good guideline is 5 clear urinations per day which indicated you are adequately hydrated.

Its also worth noting at all liquids contribute to hydration so dont believe that diet sodas or tea/coffee dont hydrate you because they do (regardless of caffeine content).

Return from Water Make You Lose Weight to the Home Page